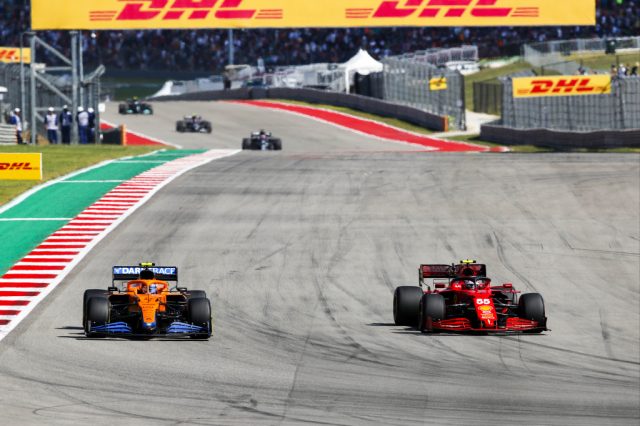 After the Turkish Grand Prix, Carlos Sainz had called the recent Ferrari Power Unit upgrade an aid, something that could have given them “the chance to be closer to McLaren on tracks that favour them, and ahead on those more congenial to our car”.

The Spanish driver chose his words carefully, a measured approach – the same Ferrari has been adopting since the introduction of the ERS upgrade on their Power Unit in Sochi, officially worth ‘only’ 8BHP, but showing more than that on track.

[EN] Will the Ferrari Engine upgrade change the fate of the battle between Ferrari and McLaren?

In Austin, “a track that on paper should have favored McLaren” according to Ferrari’s Team Principal Mattia Binotto, the Italian team came out with one of their strongest performances against McLaren – the first valid comparison since the introduction of the upgrades.

While Verstappen and Hamilton may remain out of reach for Ferrari, the two engaged in almost a separate championship, the SF21 was faster than the MCL35M on every tyre compound at COTA. Leclerc was able to drive away in a clean race (only briefly interrupted by a VSC), with a medium gap of over 3 tenths/lap over both McLaren cars.

According to the data we have gathered, the gap on the straights has been drastically reduced. McLaren was only 1 and a half tenth faster in Qualifying, due mainly to “the aerodynamic efficiency of the MCL35M compared to the (draggier) SF21, and no longer a power advantage of their client Mercedes Power Unit“, says a source close to Maranello.

Indirectly, this goes to show that the Internal Combustion Engine (ICE) was not that far behind at the beginning of the season. The upgrade on the hybrid components of the ERS system was needed to maximise the overall performance of the Power Unit, and therefore reduce the gap to the Mercedes Power Unit which grew bigger especially on a Sunday.

Talking to Sky Sport F1 after the race in Austin, Mattia Binotto said that “the car has seen an overall improvement thanks to the engine upgrade,” which further proves that perhaps the biggest advantage brought by the new ERS is the margin it gave the Ferrari engineers on the setup.

Considering Ferrari’s disastrous 2020 season – but also the gap to other teams, not just McLaren, at the beginning of this one – this is quite the improvement.

McLaren in Austin has certainly under-performed, and on a track that was never supposed to suit them best – but where they should have easily had the edge over Ferrari. Norris delivered an underwhelming performance, perhaps further influenced by an older Power Unit compared to the one in Daniel Ricciardo’s MCL35M, which was introduced just in Istanbul.

When it comes to the Ferrari duo, Leclerc also showed to have an advantage over Sainz – one of almost 2 tenths on the straights. This can be explained with a difference in the setup between the two. Sainz needs more vertical pressure on his rear in order to control it, while Leclerc is known to prefer less drag at the cost of a more unstable rear. It is also a matter of driving styles.

The added load on Sainz’s car aided him in his first stint on the Soft tyre, which exceeded the expectations of the team in terms of both pace and degradation rate. Sainz lost a position on Lap 1, where the Soft compound tyres struggled the most compared to the favourable yellow-rimmed Pirelli; the 100kg of fuel onboard of his SF21 caused him to struggle especially in the first sector, where the added weight made the car harder to handle in the ‘snake’ sequence.

In the final stages of the race, Sainz made contact with Ricciardo’s McLaren during an overtake attempt, which caused damage to his front wing, rupturing its right-end footplate. Sainz did his best to avoid causing further damage to his car (or tyres), especially on left turns – but it still was not enough to keep Bottas’s W12 behind.

Despite ending the race behind both Ricciardo and Bottas, Sainz’s put off a strong performance last Sunday. His second half could have been certainly better – and quieter – had it not been for the error at his pitstop, which caused him to lose 2,83s and the chance to undercut Ricciardo, which would have put him in P5 behind Leclerc.

Ferrari certainly needs to improve their pitstops, and quickly if they want to avoid having remorses in Mexico, where Leclerc and Sainz might both have their last big podium opportunity of the season. 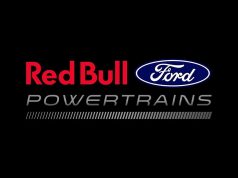 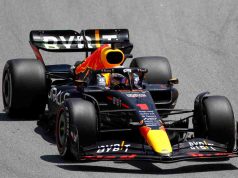 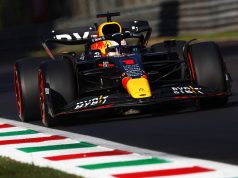