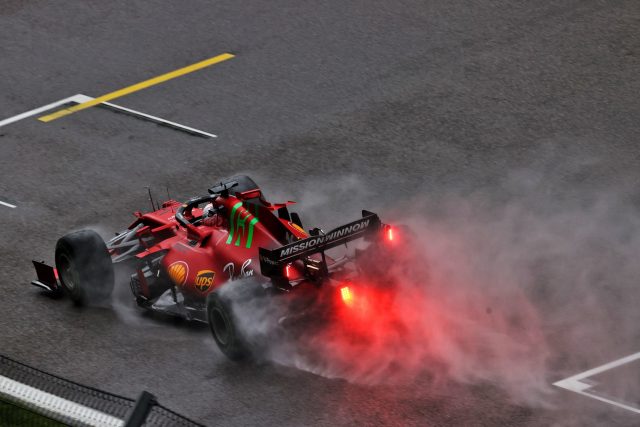 Lando Norris unexpectedly took the first pole of his career today in Sochi. McLaren keeps the momentum after their win in Monza, this time with their younger driver who seems very comfortable in the MCL35M: Norris did today what he could not do in Spa – due to a mistake in much worse track conditions.

The British driver showed consistency throughout the entire Qualifying session. On Intermediate tyres and on a track that was quickly drying up, he was already threatening to sneak past Bottas in the early stages of Q1, but still Hamilton seemed far ahead.

According to Pirelli the gap between the Intermediate and the Soft compound was 1″45 seconds. Hamilton was able to wrap up his Q2 session with a 1:45.129, so it was clear in that moment that the time to switch to slicks was coming.

In the second and last half of the Q3 session, Norris got out behind Carlos Sainz after stopping to switch to a set of new Soft tyres, managing to pull a 20 second gap between himself and the Ferrari driver. Both drivers were able to do three laps to warm up the tyres for the final push, which proved to be of key importance: doing this, Sainz and Norris ended up being in contention for the Pole. It was in Sector 3 that Norris made the difference, though: McLaren made good use of a high-load rear wing (the same used in Monaco) combined with a less rigid setup which helped them recovering some traction by using more of the tyre and compensating for the load with the aerodynamic efficiency of their chassis – something Ferrari used to do two years ago on the SF90. 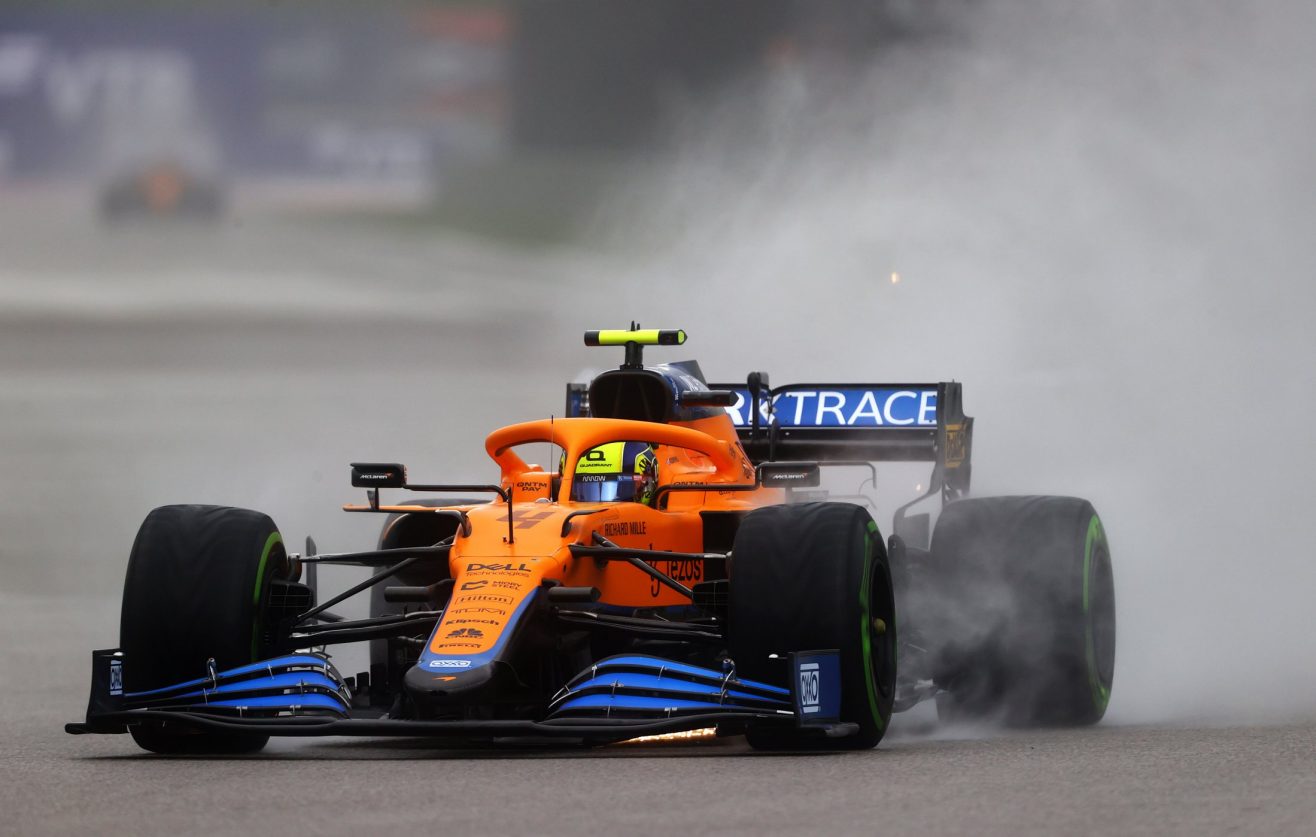 Sainz was not less impressive: after struggling on the Intermediate tyre in the earlier stages of the session, when the track was significantly wetter, he was able to recover and put together a good lap. The SF21 proves that it needs more grip to find performance; the Scuderia had opted for a rear wing with a higher load (Montmelo/Monaco Spec) on Leclerc’s car yesterday, but they discarded it on both cars today for a setup that might better suit them on a dry track.

According to the weather forecasts, the race tomorrow should be dry, though temperatures will remain quite low. Due to the wet Qualifying session, everyone will have a free tyre choice; Pirelli suggests that the best strategy for the race will be starting on the Medium tyre and then switching to the Hard compound later on, but some teams might risk a different strategies.

Despite being on pole, Norris knows that on this track the top speed advantage granted by his Mercedes Power Unit might not be enough to defend against the slipstream Sainz or Russell – or even Hamilton – might pick up from him. The start will be a key moment in the race, even considering that Mercedes has opted for a high-load setup; a mix of the two solutions tested on Bottas and Hamilton’s cars yesterday, with the high downforce rear wing we saw on the Finnish driver’s car and the high-load front wing chosen by Hamilton instead. This will make overtaking more difficult for both W12s.

Hamilton appears to be making a lot of mistakes, is Mercedes thinking of changing his Power Unit?

The reigning Champion has been making a lot of uncharacteristic mistakes this season. Nevertheless, his qualifying pace was very solid, better than Bottas – as usual in low grip conditions. It was his Pit Lane incident that affected the last part of his session, as well as his performance.

Nevertheless, unless Mercedes decides to take this opportunity to replace the British driver’s Power Unit, he will start from the second row, which is not a bad position if he plays his cards well. Unfortunately for him, he will not be able to count on Bottas for strategic support, as the Finnish driver will start in P7, a row ahead of Pérez’s Red Bull. 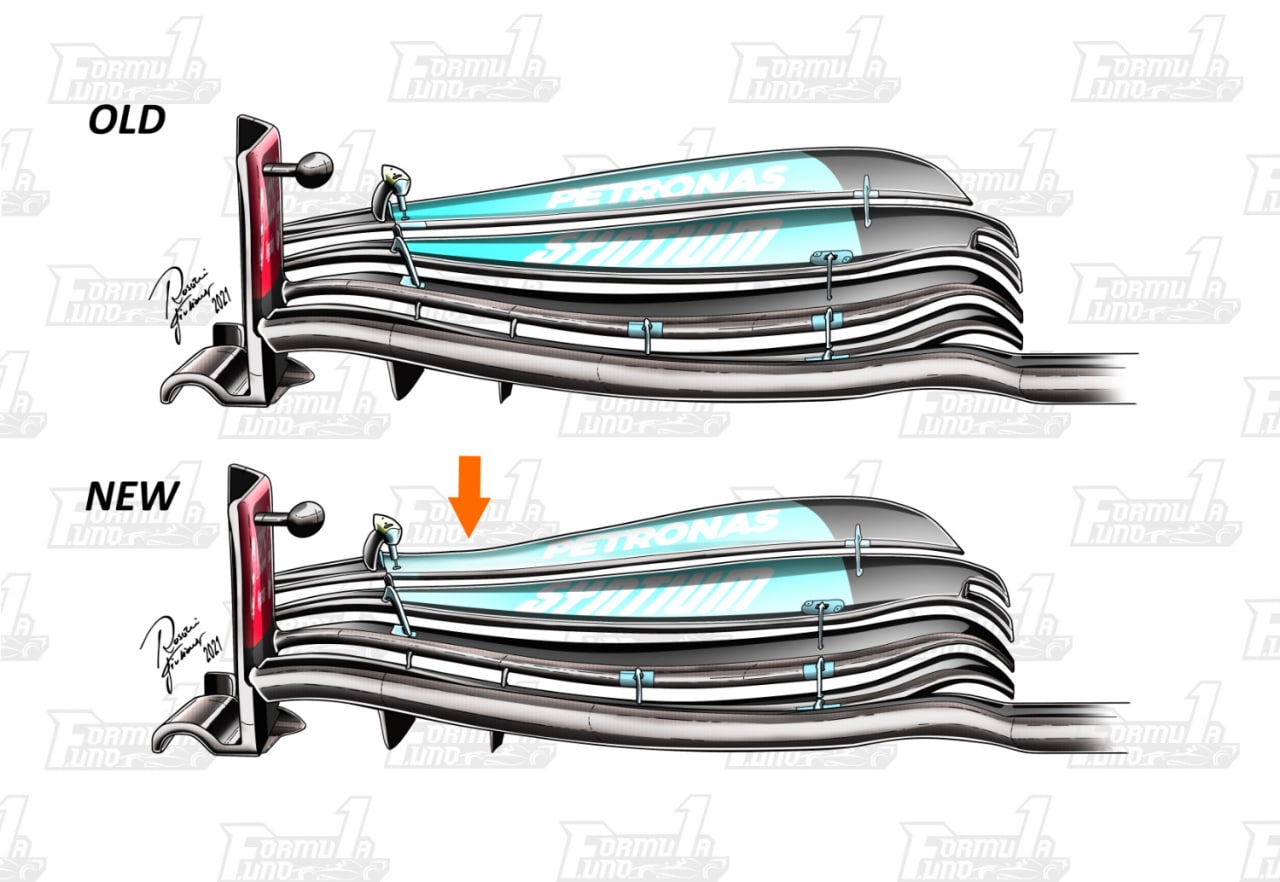 Mercedes also tested a front wing with a bigger out-wash effect yesterday, something already observed to be working well on their competitors. The Brackley team did not use it today though, opting for the more loaded solution of their standard wing. Hamilton’s W12 was instead fitted with the rear wing used by Bottas yesterday.

Although Lewis had shown excellent speed on the setup tested on his car yesterday, the engineers opted for the rear configuration tested by Bottas instead, which seemed the most effective in terms of balance – especially considering that, given their speed, Mercedes believed they could easily be on the front row today and tomorrow at the start of the race. 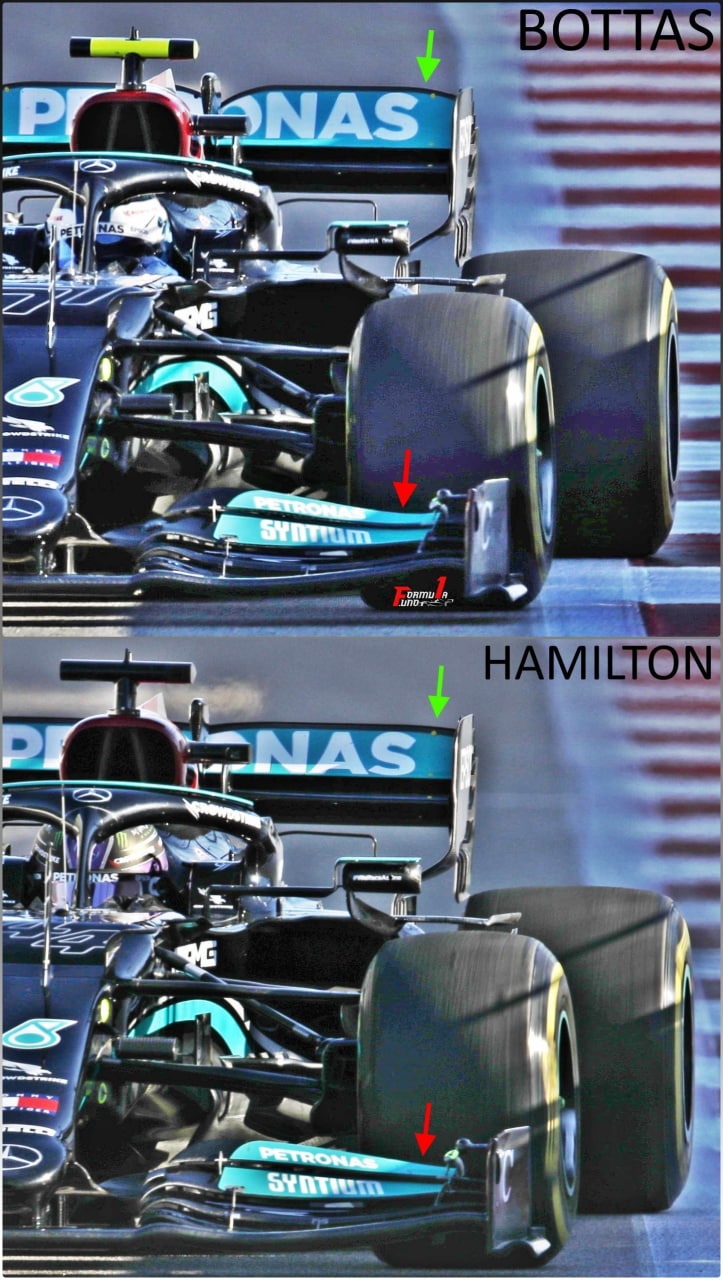 The added load will however help Mercedes managing their rear tyres better tomorrow, especially as the track will offer poor grip in the first part of the race. The setup choice is therefore justified if the race is to be taken into account, but the drivers were surely hoping for better starting position given their pace. Instead, they W12s will help the cars starting behind them, as their higher downforce setup will offer a rather powerful slipstream to their rivals when DRS is closed.

Red Bull does not despair

Checo Pérez was disappointed to end his Qualifying session in P9, but the Mexican driver will be able to count on Bottas’s aforemtioned slipstream at the start. Pérez will need to keep his Red Bull as close as possible to the Mercedes in front, both to try and trouble the Finn during the race and to remain in Hamilton’s pit window.

The Mexican opted for a a higher downforce setup compared to Verstappen, who will need more speed in the race due to his starting position (he will be joining Leclerc on the last row, in P20), even at the expense of his tyre management.

Verstappen’s goal for the race – pending any decision from Mercedes regarding the substitution of Hamilton’s Power Unit – may not be that of winning it, but to at least make it to the top five.

Leclerc gets a full upgrade from Ferrari

In addition to Carlos Sainz’s front row, Ferrari will be focused on evaluating the upgrades on Charles Leclerc’s SF21. Yesterday, the Monégasque reported happily that the improvements were both felt by him in the car, and then confirmed by the data. 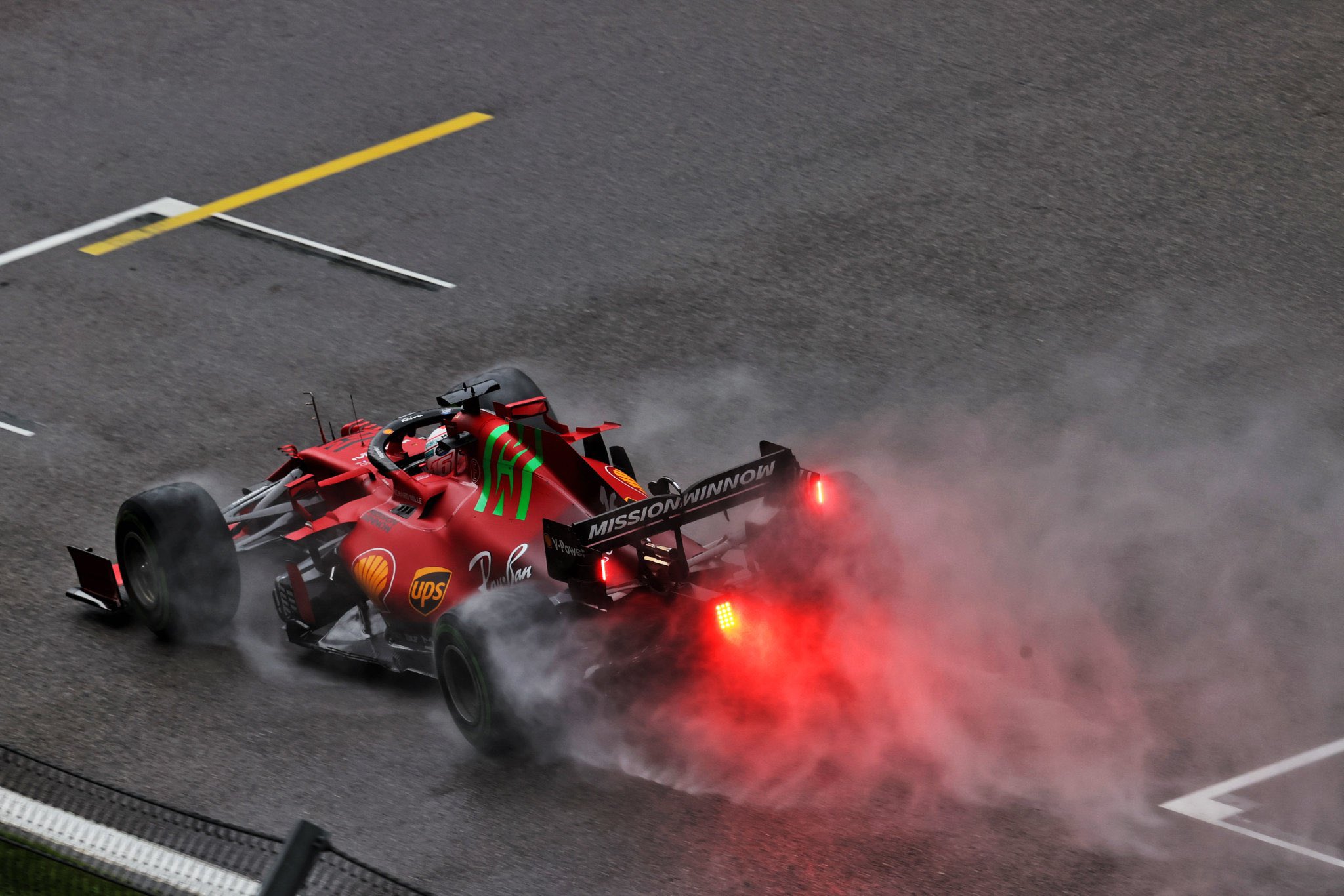 According to the information we gathered, the gain Ferrari expected in Sochi was judged to be around two and a half tenths. It is not just a net power improvement, but also a gain in overall performance thanks to a smaller and lighter battery, which gives the team the chance to better distribute the load over the car, improving the margins in terms of balance. The weight saving of the newly specified battery (ES) as well as its better efficiency had already given promising results on the dyno – with even more significant gains expected after this season, when the upgrade will be fitted to the car for which it was designed, the 2022 project.

As Ferrari’s Racing Director Laurent Mekies explained in Sochi, “the main objective remains to test 2022 upgrades on the track.” 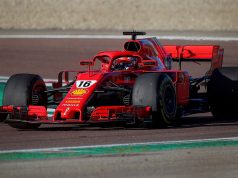 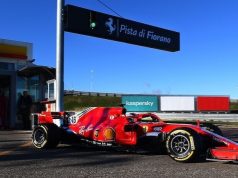 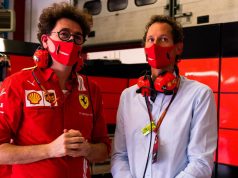