The forecast was quite clear coming into the first day of practice at Suzuka and the Japanese weather delivered a rainy day to the fans at the circuit. Both practice sessions were affected by the bad weather today. The track was in full wet conditions in the early afternoon but drivers quickly switched to the intermediate compound, even though conditions got worse towards the end of FP2 forcing teams to fit full wet tyres again. 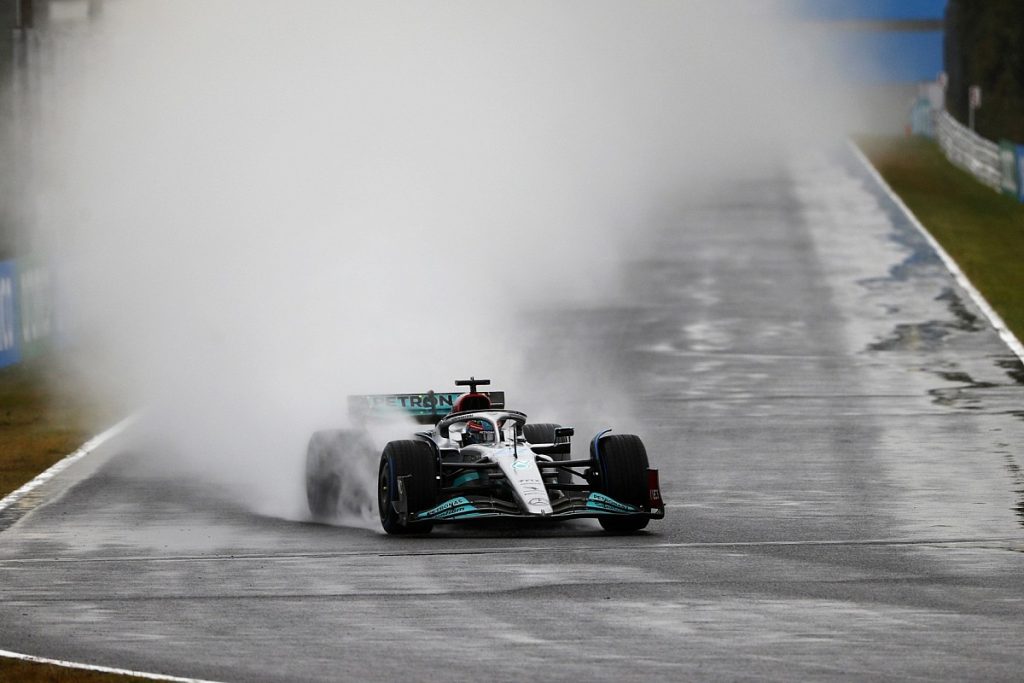 At the end of the day neither Ferrari or Red Bull were leading the timing sheets: it was Mercedes with both cars at the front of the field: George Russell 0.235s in front of his teammate Lewis Hamilton. Max Verstappen, P3, ended the session more than 8 tenths behind, followed by Perez. Magnussen snuck inside the top 5 of the afternoon with a late lap. Ferrari closed the session in P6 (Sainz) and P11 (Leclerc), with data analysis being the main focus and some problems for the Monegasque: Leclerc had some balancement problems, while Sainz was more at ease with his F1-75.

Ferrari had a very strict program in mind. Comparative tests with two different specifications of floor and rear wing. In the morning session both drivers used the medium downforce rear wing already fitted in Bahrain and Zandvoort, while in the afternoon session the Canada spec rear wing (lower downforce) was used, and this solution will be maintained for the remainder of the weekend. 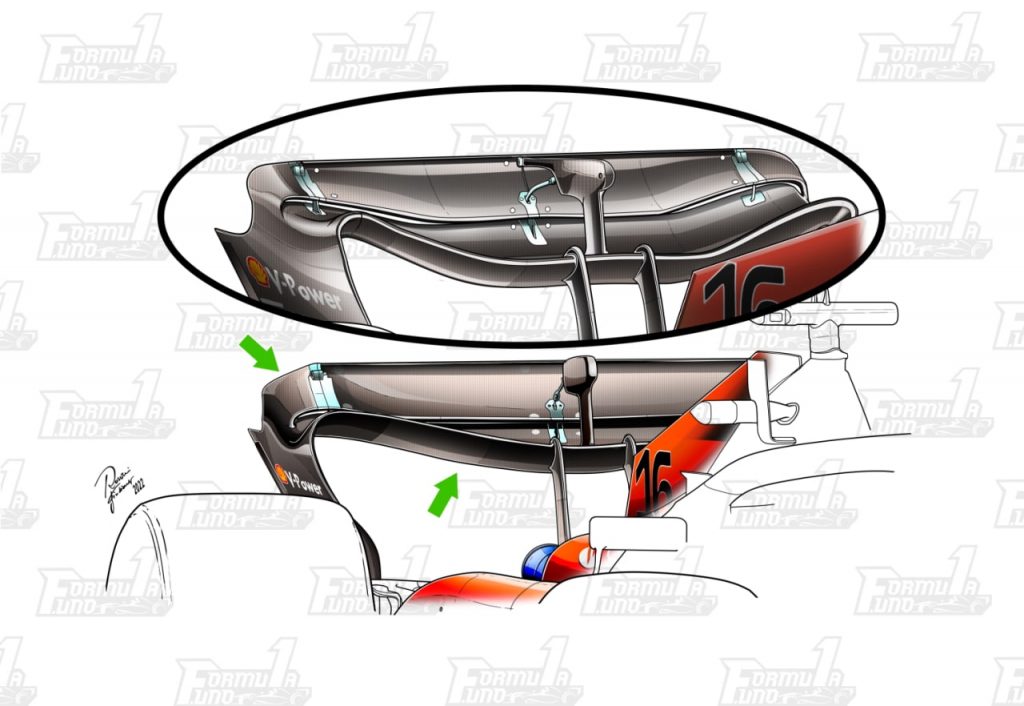 Lap times are to be taken with a pinch of salt due to the conditions faced today, and so are the positions on the leaderboards. Specifically Charles Leclerc’s, who struggled with his F1-75 this Friday. Initially a brake problem limited his running but it was quickly solved. Finding the optimal balance of the car was a tougher task; on the other side Carlos Sainz found it quite quickly, but his setup can be improved. The difference between the two drivers was quite obvious and had major consequences on the tyres. 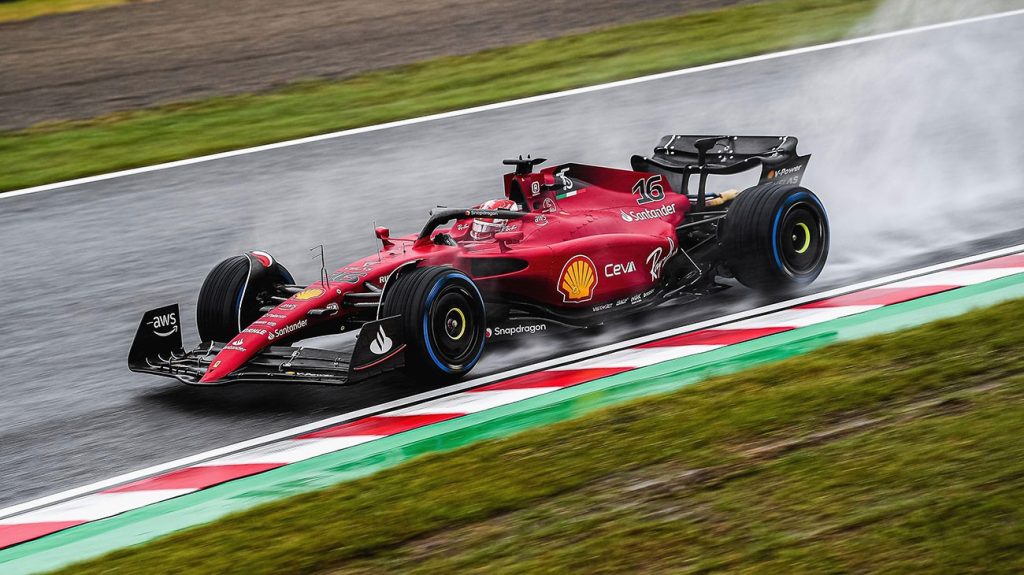 In fact the balance issues that car number 16 had today caused some graining on its tyres that made his F1-75 slide and heavily highlighted tyre degradation. His intermediate tyres lasted only a few laps and at that point it was useless to keep him on track with these conditions. “The first practice session went well and I felt good in the car, while the second one was very insignificant as my tyres were worn out.” These were Charles Leclerc‘s thoughts at the end of the day.

Carlos Sainz, on the other side, started the weekend in a better way and even in his long runs he showed good consistency throughout the laps. “Naturally these conditions allow us to run less laps than usual. The constant weather conditions allowed us to test both the Intermediates and Full Wets, so I’d say today has been productive. Now it’s time to think about Qualifying”. Reading the Spaniard’s words we can imagine that his day was positive, but the focus is on tomorrow when Pole Position will be up for grabs.

The much anticipated upgrade from the Scuderia finally made its debut. The same part wasn’t utilized in Singapore, since the track layout and the tricky conditions could’ve easily damaged the component forcing the team to spend more money for extra pieces, but in Japan it was fitted on both cars. The engineers are so sure about the upgrade that it was immediately used by both drivers, given the difficulty in comparing data in these conditions. This element is a good evolution compared to the one used from the French Grand Prix onwards and it could help limit some negative effects of the Technical Directive 39 on the F1-75. 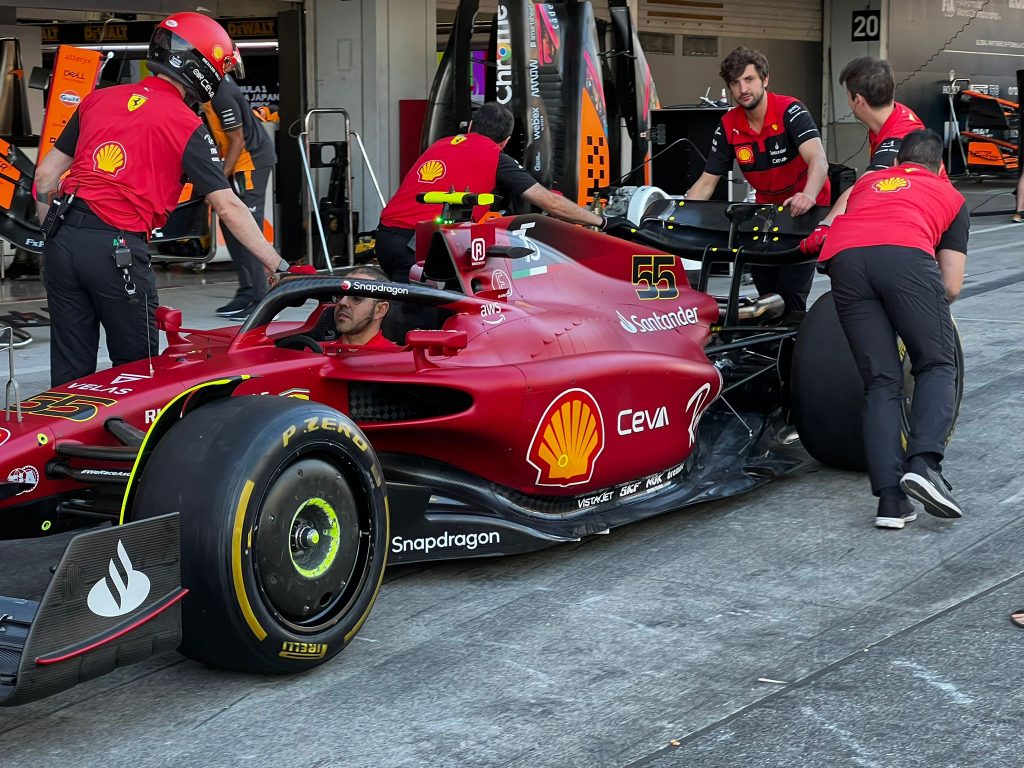 The main changes are features in the entrance of the Venturi tunnels. The outer flow diverter was redesigned, and is now more dug out and has a different curvature angle compared to the old specification. Even the (double) t-tray has seen some modifications, in terms of position and especially attack angle (more horizontal). Moving towards the rear the rod has been attached to the diffuser’s keel and not on the outer edge of the floor which has now been stiffened thanks to a different positioning of the carbon fibres. 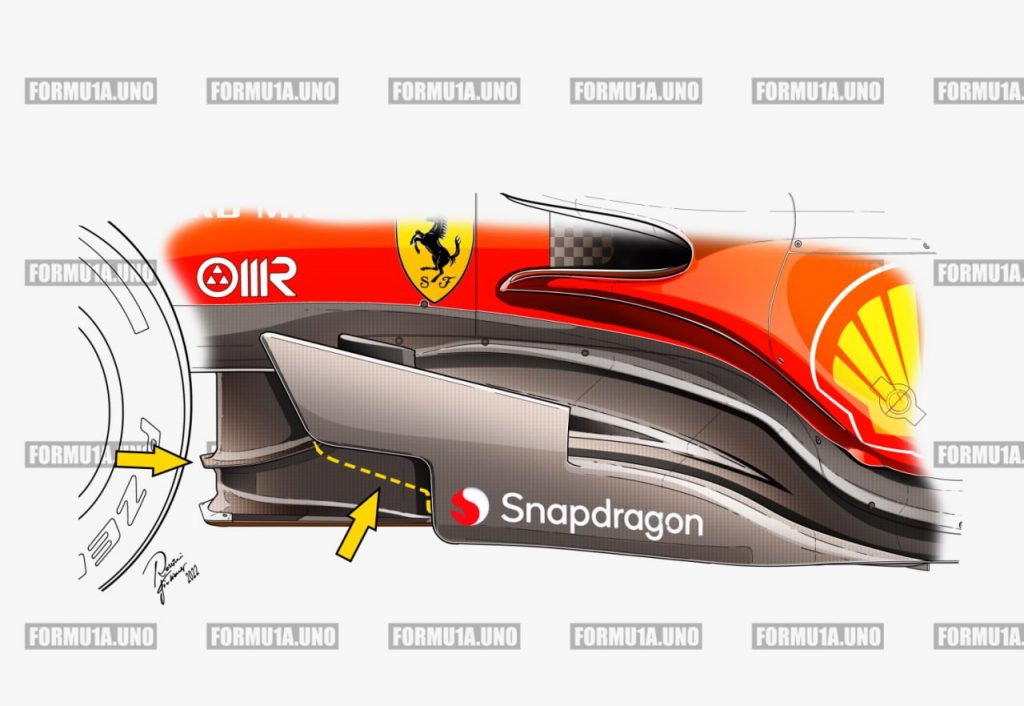 From the Belgian Grand Prix Ferrari travels with a slightly higher ride height and especially a stiffer suspension setup in order to respect the second part of the TD39, regarding the resin board under the floor. The section of the directive loosened at Singapore was relative to ride heights, which hasn’t impacted significantly on Ferrari’s performances since Spa. The idea of the engineers at Maranello, coordinated by Enrico Cardile and David Sanchez, with this new floor, is to allow the F1-75 to run with a rake setup. 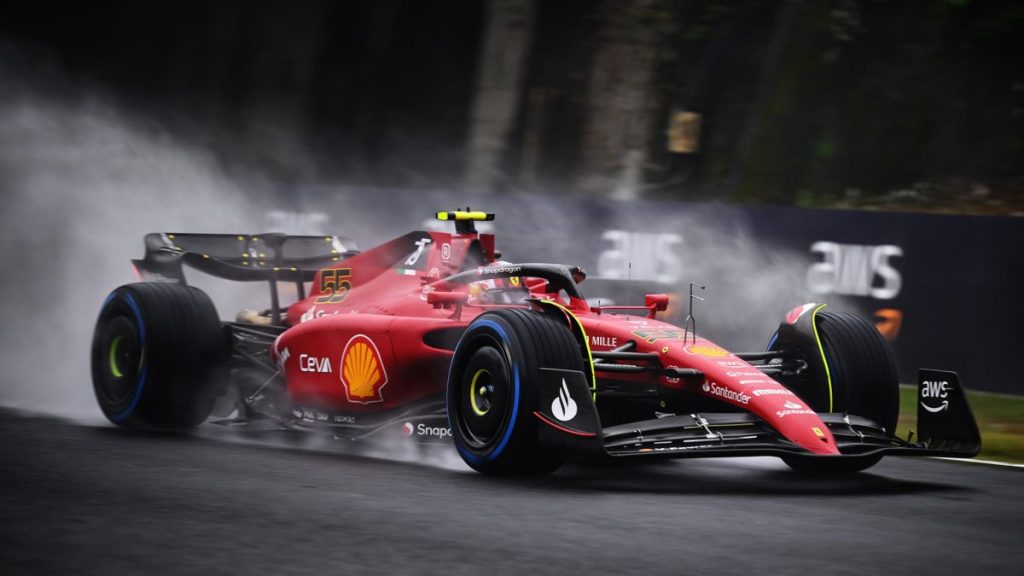 The intention is to improve recent performances, raising the rear of the car, preparing themselves to compete next season and obviously making steps forwards with the current car for the last 5 races of the season. To adopt a softer mechanical setup, gaining back the low speed grip and the ability to ride the kerbs that the Italian car didn’t struggle with in any way before the summer break, therefore protecting the plank under the floor from excessive wear.

The goal is to make the F1-75 work like it was going before the break, taking inspiration from Red Bull but maintaining solutions that adapt to their concept. The car designed and developed in Milton Keynes is now by far the reference for technicians and this is also due to the smart use of the rake angle, despite being much less aggressive than what we were seeing in the pre-2021 era. 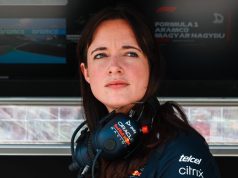 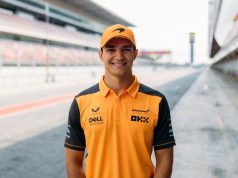 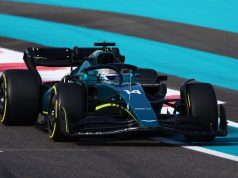