Ferrari’s poor performances have been a big topic of the recent races of the season. Despite the fact that Maranello points at the new floor and the lack of balance when asked about their recent lack of competitiveness, the TD39/22 changed the traits of the F1-75. The new technical directive forced changes in the suspension setup which set back the Ferrari in areas where before the summer break it was dominant especially compared to Red Bull.

Ferrari’s post-summer performances left the fans and experts quite puzzled. Is the lack of pace due to the Technical Directive 39 introduced at Spa or simply a coincidence? From Maranello the message is clear: according to official and unofficial sources the car lost its balance after the new floor was introduced in France.

Ferrari have put the blame on themselves for the big setback in performance which put Leclerc and Sainz even behind the Mercedes on pure pace at Spa and Zandvoort come race day. All of this is allegedly due to a problematic update, even though this component was never taken off of the car. Red Bull’s Technical Director, Pierre Waché, indirectly supports Maranello’s claims: “Developing these new cars is very complicated, especially when you try to give performance and keep the correct balance. Sometimes you have to sacrifice one of the two.” Mattia Binotto revealed that, from the French GP weekend, both drivers complained about a ‘nervous’ F1-75. Nervous? Certainly not slow, looking at the performances of both Leclerc and Sainz. Then Hungary came along, where the engineers made a wrong setup choice looking at a much cooler race, but even in that weekend the F1-75 surely wasn’t slow. Could the team have done more? Certainly, with a correct setup, but nothing to do with the big tyre management issues seen in Belgium and the Netherlands, circuits that paint a much more realistic picture compared to Monza.

Ferrari’s big slump in performances was clear especially at Spa and Zandvoort in the race, with a lot of wear on the tyres, a factor that has never been a real issue for the F1-75 before the summer break. In qualifying the extra grip offered by fresh tyres helps a lot, but in the race everyone can clearly see the main issues, even if what you have is a good car.

At Monza, Ferrari made a step back in the first free practice session trying a ‘hybrid’ floor, with a few aspects of the old component and a few aspects of the newly introduced one, convinced that the new floor introduced in France was still the right choice and certain of the good step provided by the new underbody. It was just an analysis between old and new components that allowed the engineers to gather more data for the analysis and the understanding of what hasn’t been working as planned, especially after the debut of the TD39/2022. Also to understand if the new floor could work better than the current (new) spec with the setup changes that we will talk about in a moment. Only denials from Maranello.

Carlos Sainz brought the old spec (pre France) floor on track. The answer was expected: the new floor is better than the old one and the development is on point, confirming the correct data correlation between simulator and track. The Italian team found some of the answers it was looking for, but not all of them yet. In FP2 we saw the France floor on the Spaniards F1-75, once the data had been gathered, completing all the weekend with the latest development packages which were delivering great results at Paul Ricard up until FP2 in Hungary.

Signs and data that confirm that the F1-75 changed from after the summer break, giving us crucial elements to help us understand where Ferrari lost its performances. We have to look at the slow and medium speed corners, where the red car always made the difference compared to the RB18, especially mid-corner and in the traction zones. 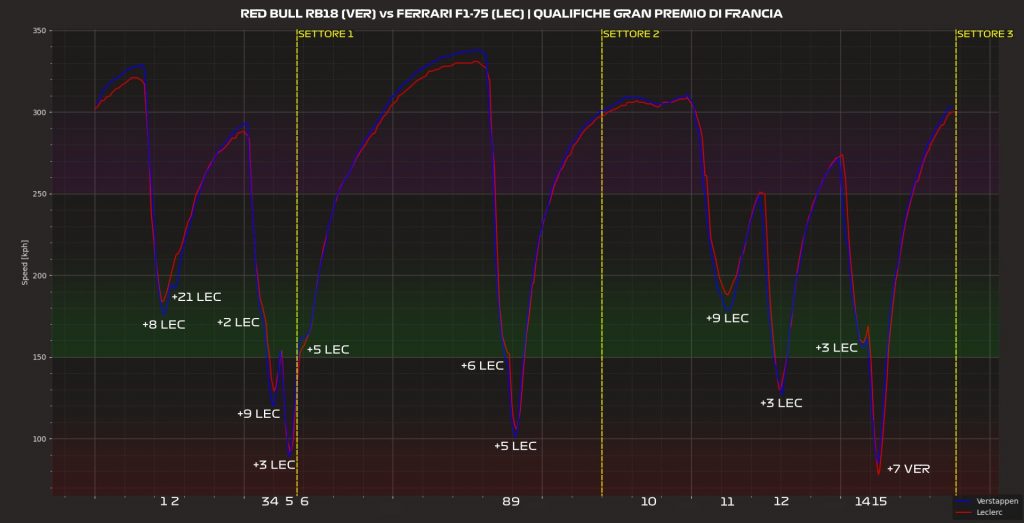 In France Ferrari was faster in almost every single corner and not by a close margin. In qualifying we saw gains of half a tenth on average in every slow corner, with speeds under 150kph, and gains of almost a tenth on average in every corner between 150 and 250kph, medium speeds. The F1-75 has always excelled in overall downforce, also helped by the great grip offered by the always soft suspensions, which made the car dominant from mid corner onwards. The RB18, on the other side, is – and remains – the most efficient car on the grid, regardless of the circuit and setup, but with overall less downforce (aerodynamic and mechanical) compared to the F1-75.

Before the break the Ferrari was also very strong in tight changes of directions other than slow corners, showing great agility and an (almost) always perfect mechanical setup. Red Bull never hid the fact that, according to them, the Ferrari was the best car when it came to mechanical grip and on the kerbs. This strength was made possible especially thanks to a very soft suspension setup and a car that was able to remain balanced in those situations. 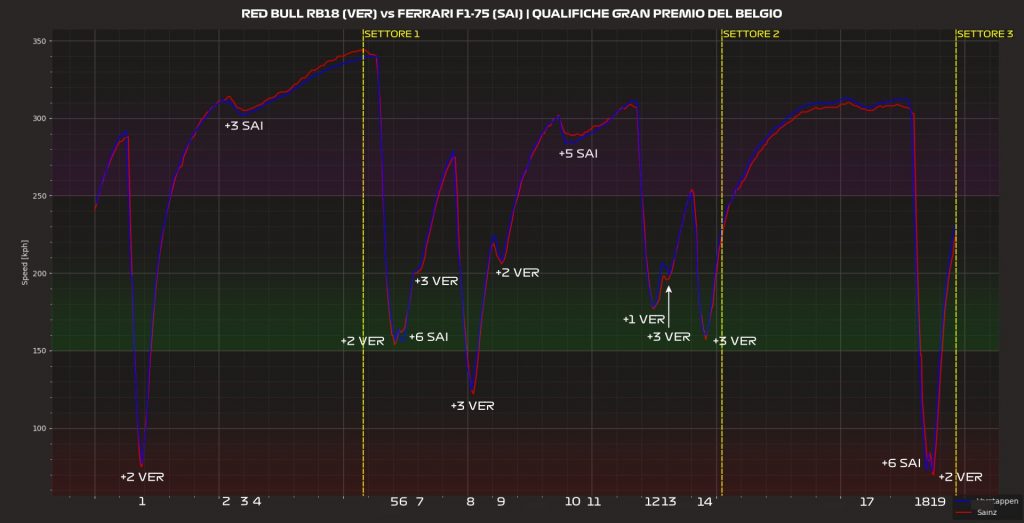 From the Belgian Grand Prix, the world turned on itself. Now we see another Ferrari. A F1-75 that lost its spirit and started suffering tyre wear heavily. The Red Bull remained dominant on the straights, and overturned the disadvantage that it had in medium and especially slow speed sections, and in Spa was gaining around half a tenth per corner in slow and medium speed, dominating the Ferrari in what became its backyard. In high speed sections the F1-75 remains superior.

So in high speed sections the downforce hasn’t disappeared on the car, with the new floor currently working well. Although where the F1-75 loses a lot now is in the tight direction changes, in slow corners and in traction zones. In traction we saw an improvement between Zandvoort and Monza, with dedicated work on the setup, but it isn’t a secret that the Temple of Speed is a unique track on the calendar and requires a specific overall package. We saw some steps forwards in the Netherlands too, but in that case the high downforce setup helped in comparison to Red Bull, but even in that instance the F1-75’s were still losing in slow speed sections and especially had tyre issue problems.

Here is where the Technical Directive 39 struck Ferrari

Starting from the Belgian weekend, the Ferrari seems to have lost its mechanical load, not much the aerodynamic one. Looking at the aerodynamic downforce, something was surely lost but not enough to see that as a weakness even after the summer break. At high speeds the car still behaves quite well, now what is missing is performance at lower speeds, something that points towards a lack of mechanical grip.

We have to add that the red cars have seemed less aggressive on kerbs, with the car showing less balance, and in the last races a very high tyre wear, these are all clues that point us towards a lack of mechanical grip coming from the suspension system of the F1-75. This was a big strength of the car up until Hungary: what happened? 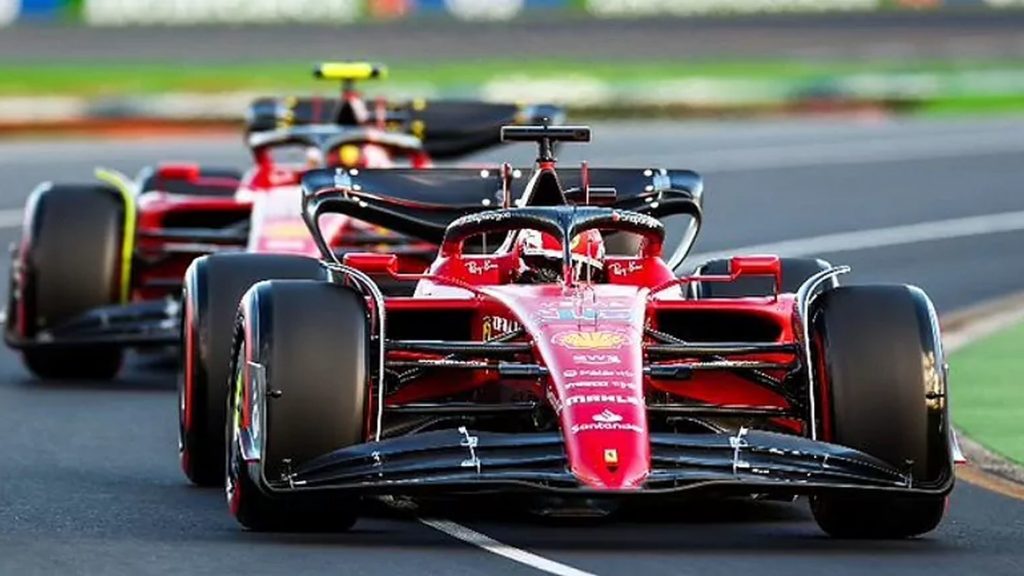 The Technical Directive 39/22 influenced the overall performances of many teams, but mainly Ferrari’s. Is this negligible as Binotto says? The loss of even one tenth due to this could have made a big difference between Ferrari and Red Bull at the time. Although this seems to have had an effect that anyone would call much more than ‘negligible’, something has broken the slim balance on which Formula 1 cars operate and race.

Ferrari was forced, like many other teams, to raise their ride height with an almost insignificant loss of downforce given the fact that together with Red Bull and Alfa Romeo, the F1-75 was one of the cars that didn’t suffer ground height changes (almost) at all. On the other side the new TD39 also forced engineers to stiffen the suspensions in order to comply with the FIA’s floor flex and skid wear parameters. A change like this can’t be called ‘minor’. At Spa engineers found themselves working with, and on, a different beast, unknown and unpredictable.

The car now clearly has a reduced working window mainly due to a ‘limited’ mechanical setup. At Zandvoort the situation slightly improved but the wear remained very high and the balance not ideal. At Monza – thanks to the traits of the circuit that limited the effect of the TD – a better balance was found but the tyre wear still remained very high compared to the first part of the season. Singapore will be an important weekend from this point of view. We will come back to that.

Now Ferrari’s goal is not to win every Grand Prix but, first of all, to understand the “new” car, improving the balance of the F1-75 and calibrating the setup in order to use softer setups. Will it be possible? Nobody has given (or wanted to give) any reassurances.