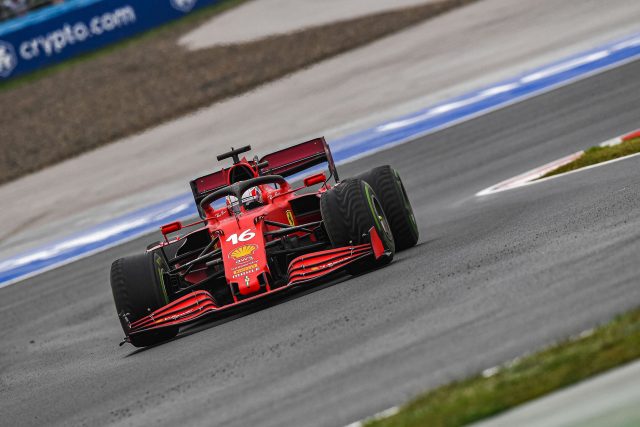 Will the Ferrari Engine upgrade change the fate of the battle between Ferrari and McLaren?

The sixteenth round of the 2021 Formula One season left McLaren with their hands half empty, their presence like a ghost. Norris’ seventh place finish feels a bit disappointing, but the British team was expecting a complicated weekend.

The great aerodynamic efficiency and, above all, the kindness the MCL35M has shown on the Pirelli tyres throughout the season – and which on tracks like Monza had given them an edge over their competitors – played a very different, almost opposing role in Istanbul.

Even Lando Norris had a rather average and forgettable race – though his ability to maximize the performance of the MCL35M in critical conditions remains exemplary.

However, even with one of the best pit strategies across the grid (a call made on lap 35, which allowed the English driver to manage the pace and limit the struggle on both the old and new set of Intermediate tyres he used), Sainz would have finished with him (if not ahead) if not for a sensor issue during his pit stop, and after starting from the back of the grid.

In the final stages of the season, McLaren will keep their top speed advantage on the straights – but the Papaya team will no longer have 3 to 4 tenths of pure engine advantage over Ferrari, especially in the race.

Despite missing out on a podium with Leclerc last Sunday, Ferrari was still able to score good points for the third place in the Constructors’ Championship. Even better (or worse, if you are McLaren), the Scuderia was able to reduce the gap over two races where their drivers were serving harsh penalties – necessary to fit their cars with the fourth and upgraded Power Unit, which reduced the engine gap to Honda and Mercedes with a gain estimated, officially, around ‘only’ 8bhp. 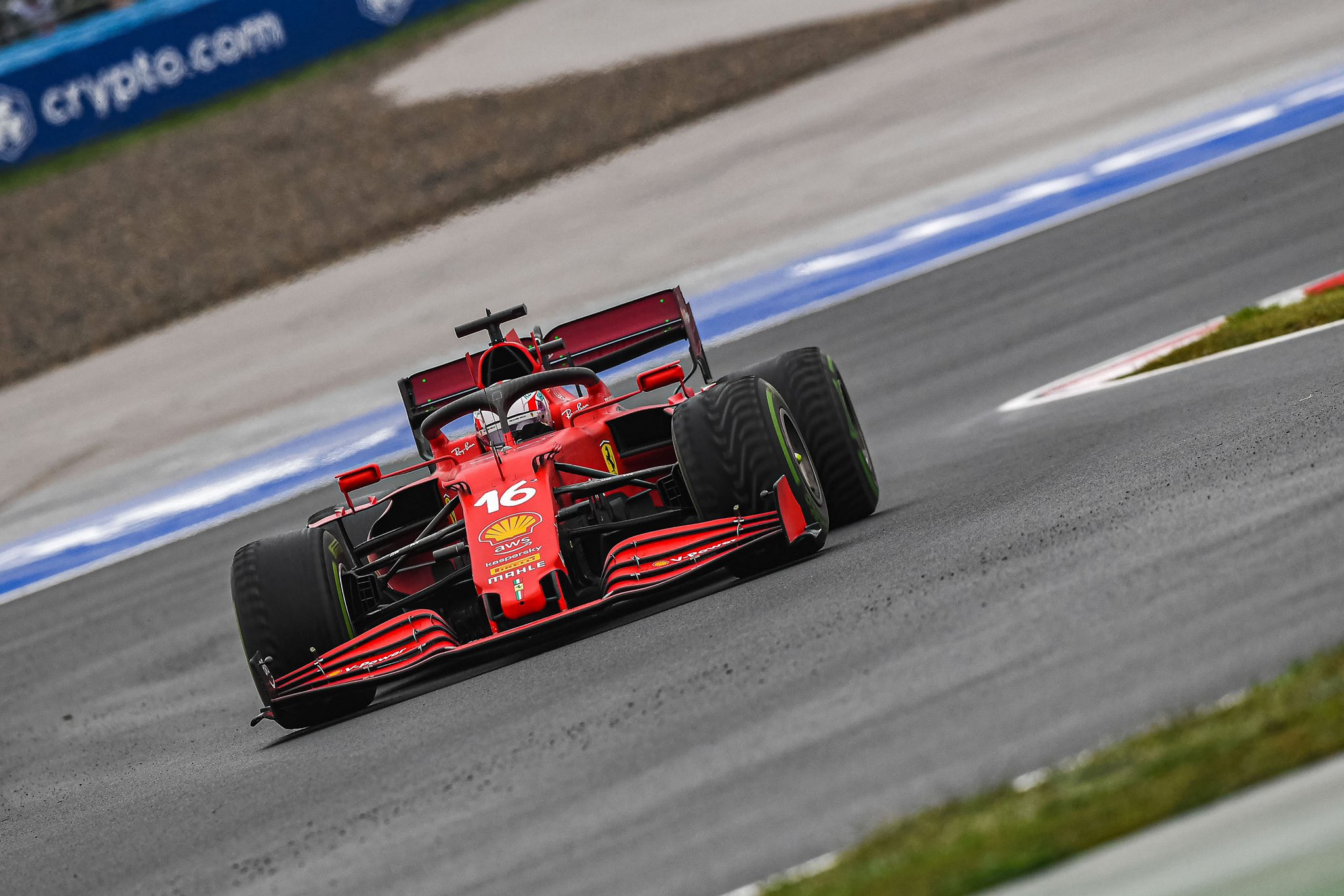 Charles showed incredible pace during the race in Turkey, especially in the first stint – something that took everyone, including Ferrari, by surprise. The Monégasque driver was able to switch on his tyres perfectly at the start, and managed to stay close on pace to the Red Bull of Verstappen.

Leclerc gambled on a win and tried to finish the race without stopping, but a flat spot on his front right tyre on Lap 37 limited his chances – the loss of grip on that axis especially important in the first and last sector.

Everyone had issues managing the Intermediate compound after the stop

After Leclerc stopped for a new set of Inters with 11 laps to go, he had to deal with Sergio Pérez on track; defending from the Red Bull driver meant that the Monégasque pushed his tyres right from the moment he exited the pits, instead of switching them on gradually, which would have contained the graining.

The early pushing on the new set, on a rather dry track compared to the start of the race, caused massive graining on the rear tyres, and then on the fronts. As a result, the performance of his SF21 plummeted for a few laps – three in total. It was only in the very last few laps, thanks to Leclerc managing to warm up the core of the tyre, that the graining cleared and the performance slowly returned. But by then, it was too late.

Leclerc’s performance was nonetheless superlative, especially if we consider that he raced with a dry setup (less downforce) which was not ideal for the race conditions found on Sunday in Turkey.

The weight of the fuel, coupled with the high levels of grip offered by the tarmac and the Low Range of Intermediate compound, helped the SF21 putting the right amount of stress on the tyres despite the low downforce setup. 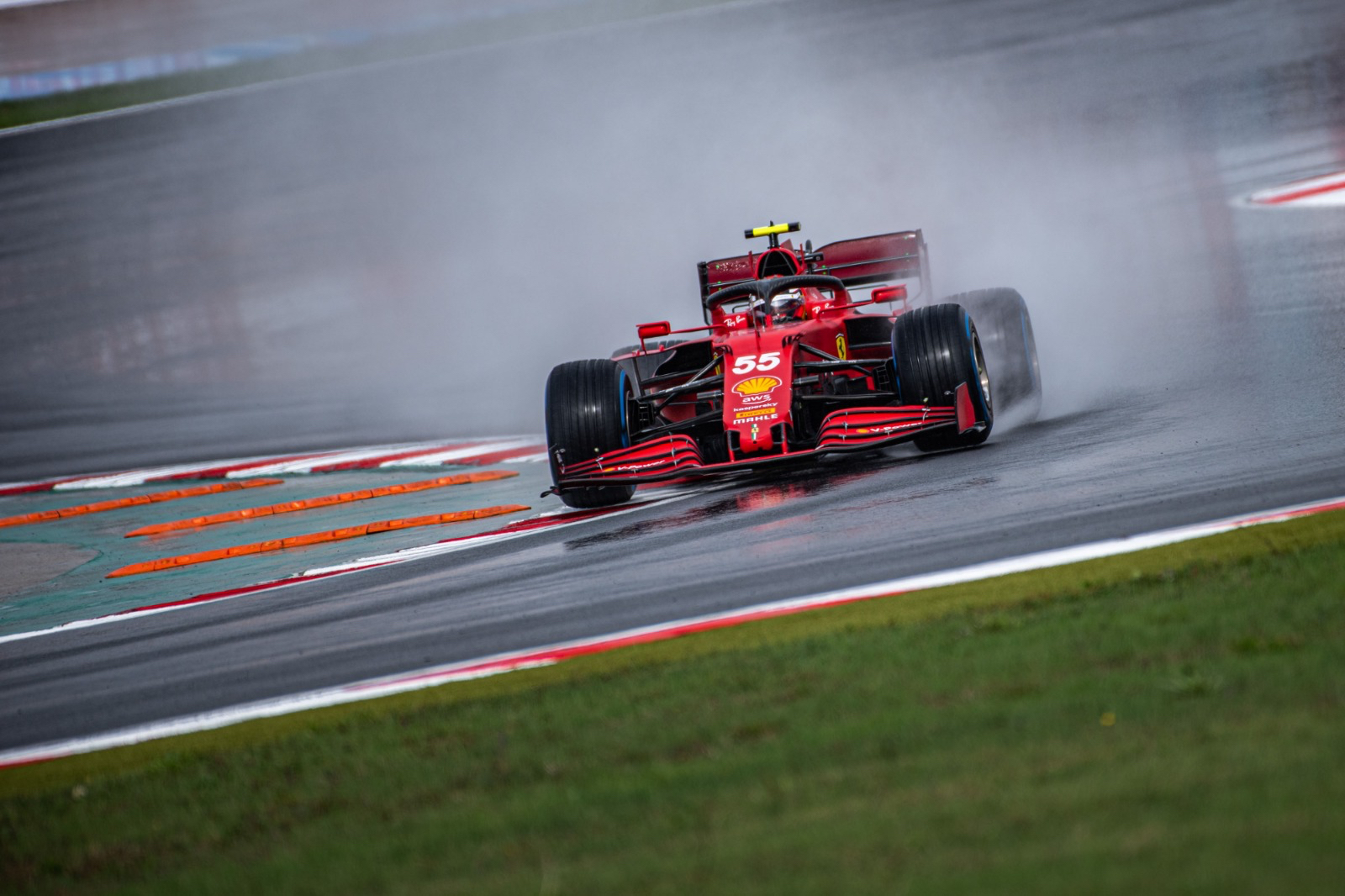 Carlos had the perfect setup for the conditions

Why did Sainz not suffer any graining?

Carlos handled the warm-up phase of his tyres better once he was in clean air. Once he got rid of the Alpine of Esteban Ocon on track, Sainz was able to bring his tyres in their optimal operational window for the final part of the race, showing very strong pace.

The issue with the new sensors during his pitstop costed the Spanish driver a few seconds – and possibly the chance to overtake Norris before the end of the race. During his stop, the sensors failed to register the tyre change and the light did not turn green immediately. Sainz was further delayed by a Haas transiting in the pitlane at that moment.

Sainz’s race was nevertheless very strong, the kind of race engineers like to analyse. Despite track conditions, his series of overtakes, all achieved without the use of DRS and on a high downforce setup, is indeed clear indication that the Ferrari engine upgrade has given their drivers the chance to use more power while overtaking – something that we had already observed with Leclerc in Sochi.

Even Mattia Binotto, who likes to measure his words, made a few comments that seem to confirm this. The Swiss-Italian Team Principal spoke of a “small advantage” of “one or two tenths” – although he warned that the effective gain was difficult to quantify, because it depended on the track.

The new ERS has not only given the SF21 a boost in terms of power, by allowing it to use more energy, and for longer – but it has also indirectly given the engineers more margin on the setup.

Leclerc was able to use a “spoon” wing configuration with less load without having to sacrifice balance; the added rake was in fact able to compensate for the loss of downforce on the wing in mixed weather conditions.

This is what helped the Monégasque’s pace especially in the early stages of the race, when the track was wetter. In Austin, where the real challenge is corner entry, we might see it again; a solution that allows Ferrari to run less downforce on the wing to reduce the drag and more rake to generate downforce at the same time.

On top of that, Ferrari can also count on more power, which eliminates engine clipping and compensates for the extra drag.

Despite Maranello insisting on keeping a low profile on the upgrade, according to sources, “the step is important, we know what the new package can give us, which is more room to optimise the setup on the car and extract more performance from it.”

The SF21 thus has the chance to prove that it can be a very good car. Not one able to fight at the top this year, but certainly closer to the best, as Binotto himself has confirmed.

McLaren remains a strong opponent, and has worked very well throughout the season, making the best of every opportunity that was presented to them. However, the power gap has now narrowed considerably; the Mercedes engine cannot be pushed any further, and they will be the ones who will suffer more in terms of engine usage, considering how many kilometers these Power Units will have covered by the end of the season. For this reason McLaren is considering fitting new components on their Power Units – which will come at the cost of a harsh grid penalty.

The goal Scuderia Ferrari had at the beginning of the season was the Third place in the Constructors’ Championship; it would seem like the Italians never took their eyes off this mission, despite focusing almost entirely on the 2022 project. As Mattia Binotto said again recently: “I think everyone is fine with it. It would be nice to finish third in the Constructors.”